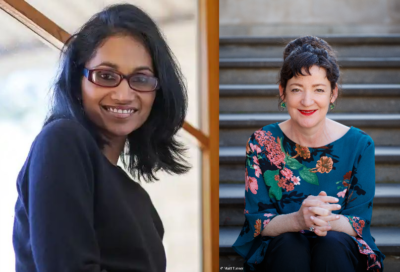 Australian authors tell us the most recent book they have read and loved, and why.

Hayley Scrivenor is the author of forthcoming crime novel Dirt Town (Macmillan, May).

‘I was fortunate enough to see Larissa Behrendt speak at the 2021 BAD Sydney Crime Writers festival about her book After Story (UQP). I got the audiobook and loved it. The actresses who read the parts of Jasmine, a young Aboriginal lawyer, and Della, her mother, do a fantastic job. I re-read it in paperback and loved it even more. The novel looks at a crime in the past, where a young girl has gone missing, and its implications in a way that just leaves me in awe. It is an exploration of the long-reaching effects of a crime in a way I think is important for readers and writers of crime to engage with. I read for voice more than anything, and Behrendt gets the two women so right. There are insightful meditations on justice, race, shame and love, and it’s a touching story about mothers and daughters that features a literary tour of England. You simply can’t go wrong!’

Shankari Chandran is the author of the novel Chai Time at Cinnamon Gardens (Ultimo).

‘After Story by Larissa Behrendt (UQP). Now that my local bookstore is open, I’m ordering copies for my friends and then I’m going to pretend I haven’t read it so I can suggest it to my book club (book club has very strict rules but, between you and me, it’s worth breaking that social contract for After Story). It has everything I want in a book: a lawyer who loves literature; the norms, falsehoods and shame created by our colonised histories (including the literature of the coloniser); and the messy, messy love that ties families together. It’s painful, warm and utterly beautiful.’

Jennifer Pinkerton is the author of the forthcoming nonfiction exploration of modern love Heartland (A&U, May).

‘One of my big loves is my place on the map: the Northern Territory. As it’s such a beautiful, but sometimes strange part of Australia, I am always keen to dip into writing that explores Northern Australia’s quirks, past and present. The last book that I couldn’t put down was Larrimah by Caroline Graham and Kylie Stevenson (A&U), about a missing man from a small town in the outback, about 500 km south of Darwin. The writers themselves ended up getting entangled in the narrative … a bit like I did in Heartland. The story is gripping, dark and weird, but full of heart.’

Monica McInerney is a bestselling novelist. Her first book for children, Marcie Gill and the Caravan Park Cat (Puffin), was released in late 2021.

‘I’ve been reading so many brilliant books by Australian authors in the past 18 months, but I’d like to shine a spotlight on two debut novelists I worked with through the Australian Society of Authors’ mentorship program. They both worked for years on their first novels, which were published during lockdown, and I’m still hopeful they’ll find many happy readers: Catch Us the Foxes by Nicola West (S&S), a gripping, witty, unpredictable thriller, described as The Dry meets Twin Peaks; and The Last of the Apple Blossom by Mary-Lou Stephens (HQ Fiction), a heartfelt historical drama following two women’s lives, loves and families over decades in Tasmania.’