Miles Franklin longlisted author Stephen Orr delivers a surreal, dryly funny fictional take on the infamous Ern Malley affair – perhaps Australia’s most infamous literary hoax – in a novel that expertly blends fact and fiction, and questions the very nature of authenticity and creativity.In the darkest days of World War II, Ethel Malley lives a quiet life on Dalmar Street, Croydon. One day she finds a collection of poems written by her late (and secretive) brother, Ern. She sends them to Max Harris, co-editor of modernist magazine Angry Penguins. He reads them and declares Ern an undiscovered genius. Determined to help publish the poems, Ethel moves in with Max and soon becomes a presence he can’t understand, or control. He gets the feeling something’s not quite right. About Ethel. About Ern. Then two poets come forward claiming they wrote Ern’s poems.What follows is part-truth, part-hoax, a dark mystery as surreal as any of Ern’s poems. Max wants to believe in Ern, but to do this he has to believe in Ethel, and attempt to understand her increasingly unpredictable behaviour. Then he’s charged with publishing Ern’s ‘pornographic’ poems. The questions of truth and lies, freedom of speech, and tradition versus modernism play out in a stifling Adelaide courtroom, around the nation’s wirelesses, and in Max’s head.Based on Australia’s greatest literary hoax, Sincerely, Ethel Malley explores the nature of creativity, and human frailty. It drips with the anaemic blood of Australian literature, the gristle of a culture we’ve never really trusted. 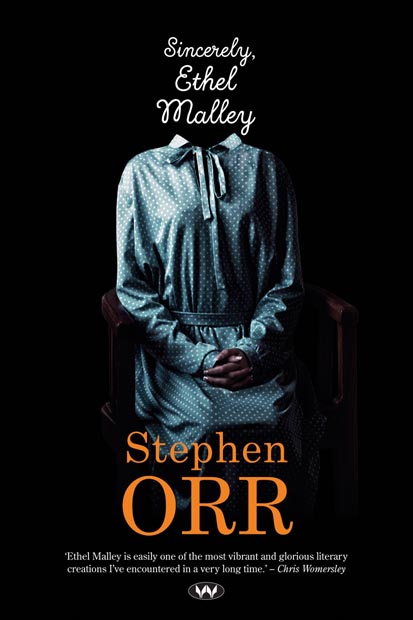