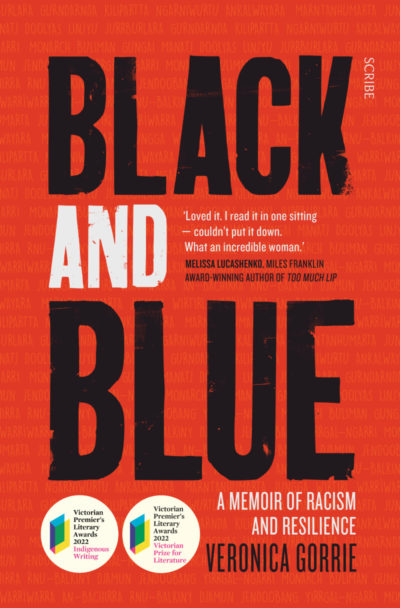 In February this year, first-time author Veronica Gorrie took home Australia’s richest literary prize, the $100,000 Victorian Prize for Literature at the 2022 Victorian Premier’s Literary Awards, for her memoir Black and Blue: A memoir of racism and resilience (Scribe). ‘Her personal journey, from thinking she can change Aboriginal worlds through joining the police force through to being an abolitionist, is an urgent story to be told and one that must be heard,’ said the prize judges of the book, which also won the $25,000 prize for Indigenous writing. Winners in other categories included Melissa Manning’s short story collection Smokehouse (UQP) and Amani Haydar’s memoir The Mother Wound (Macmillan).

Awarded in the category of literature every three years, the 2021 Melbourne Prize for Literature for an outstanding body of work went to The Slap and long-time Allen & Unwin author Christos Tsiolkas. While Tsiolkas took home the $60,000 prize, poet and author of the recently Stella Prize-shortlisted collection Dropbear (UQP) Evelyn Araluen won the $20,000 Professional Development Award; writer and comics artist Eloise Grills won the $15,000 Writer’s Prize; and Maxine Beneba Clarke was named the winner of the public-voted Civic Choice Award.

Presented biennially by the South Australian government, the 2022 Adelaide Festival Awards for Literature were presented across 11 categories earlier this month. The Yield by Tara June Winch (Penguin) (which has won several high-profile awards including the 2020 Miles Franklin), was awarded both the $15,000 fiction prize and the $25,000 prize for best overall published work, while other category winners included Olive Cotton by Helen Ennis (HarperCollins) for nonfiction, and Fifteeners by the late Jordie Albiston (Puncher & Wattmann) for poetry.