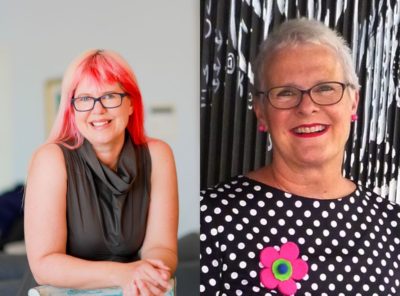 How did the idea for your new venture Bold Type Agency (BTA) come about?

Fiona and I worked together on Holy Cow! by Sarah MacDonald in 2002. Fiona was the publisher, and I worked on world English-language rights. Fiona immediately started pitching and I would follow behind and we’d tag team to cover ground and build excitement. Holy Cow! was published in North America and the United Kingdom, and Fiona and I continued to attend fairs together, often meeting foreign editors as a very effective ‘double act’. Over the past 20 years of not working directly together, we would often talk about how much fun we had and how we’d love to one day have our own rights agency.

Is your decision to start BTA an indication of a shift in how rights are sold since Covid?

Not at all. Covid has meant a different way of connecting—more Zooms etc., and as people start to travel again I think we’d simply add the ‘additional’ meetings (i.e. have 70 meetings at a fair, and another 50 or so Zooms during the book fair seasons). We can cover more ground. Essentially, we saw a gap in the market for rights selling. Many publishers have active rights departments and many literary agents also have their own contacts. But many others don’t and we hope that we can bring value to those organisations.

Are publishers and agents more likely to acquire film rights from authors than in the past, and does this make a focus on film rights more feasible now than it might have been once? (Or do you just like movies?)

Agents would usually represent the film rights more so than publishers. But we saw more interest from producers over the Covid period than ever before. Just like selling to the international markets, pitching to producers is its own skill set and time demands.

How are you feeling about attending Frankfurt in person after almost three years without travel or fairs?

At first somewhat apprehensive—less so about a resurgence of Covid cases but the thought of being in such a social setting. Even a book fair dinner with a large group feels stressful! As the appointments were confirmed, and reservations made, and plans to meet for drinks confirmed … Somehow everything disappeared and left the excitement of just being in that moment again.

Will you approach things differently now that the pandemic has changed the way we work?

There’s still a hybrid model in place and I hope we don’t lose that. BTA started Zoom meetings with international publishers and co-agents in late September. There’s a new ease (if you can call it that) in scheduling meetings. If you can’t find a time during the Fair, you can always offer the option of Zoom. It’s surprising how many people are still happy to do this. Even better, we can now organise Zoom calls throughout the year just to catch up and get a better sense of what’s happening. Co-agents and editors are much more willing to discuss why they’re not acquiring a book by Zoom than by email. And while we’d all prefer that Zoom to discuss an actual offer, that feedback is also invaluable.

What are you expecting to the be the big trends at Frankfurt?

There’s still an appetite for ‘cosy’ crime and upmarket fiction. More than ever, there needs to be a hook or a ‘big idea’ behind the narrative. Romance is still on the rise following the success of BookTok.

What are you most excited to be pitching at the fair?

Bold Type Agency is preparing to pitch its first list in both New York and Frankfurt and we can’t wait to get started. Our fiction rights catalogue features standout out titles in all categories from literary fiction (Why Do Horses Run by Cameron Stewart and Red Bird by Rijn Collins), crime (Apartment 303 by Kelli Hawkins; Seven Sisters by Katherine Kovacic, The Woman Who Knew Too Little by Olivia Wearne), crime with a twist of gothic horror (When One of Us Hurts by Monica Vuu) commercial fiction (A Year in Umbria by Jenna Lo Bianco), historical fiction (Where Light Meets Water by Susan Paterson and The Illumined Thread by Sally Collins-James) and so much more.