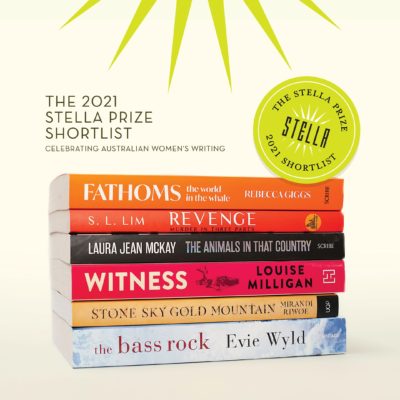 The six shortlisted books are:

Each shortlisted author receives $2000, courtesy of the Trawalla Foundation.

Chair of judges Zoya Patel said: ‘The 2021 Stella Prize shortlist truly demonstrates the immensity of talent in Australian women and non-binary authors. This shortlist is varied, diverse, and reflects on urgent themes across the gamut of human experience. These books explore grief, loss, joy, hope, and anger. They feature strong and imposing women characters and authorial voices, and as diverse as they are in style, tone and topic, they are united by their expression of the Stella criteria of original, excellent and engaging.’

The shortlist comprises two works of nonfiction, Fathoms and Witness, and four novels. Several of the shortlisted titles are previous prize winners: Fathoms won the American Library Association’s 2021 Andrew Carnegie Medal for nonfiction and the 2020 Nib Literary Award; The Animals in That Country won the 2021 Victorian Prize for Literature; and Stone Sky Gold Mountain won the 2020 ARA Historical Novel Prize and the 2020 Queensland Literary Award for fiction.

The shortlist, which was announced live on ABC Radio National’s ‘Breakfast’ program on 25 March, was chosen by judges Patel, Jane Harrison, Elizabeth McCarthy, Ian See and Tamara Zimet from a longlist of 12 announced in early March. The winner of the 2021 Stella Prize will be announced in an online event on Thursday, 22 April.

First established in 2013, the Stella Prize is presented to the best work of fiction or nonfiction by an Australian woman or non-binary writer published in the previous calendar year. Jess Hill won the 2020 prize for her investigation of domestic violence See What You Made Me Do (Black Inc.).