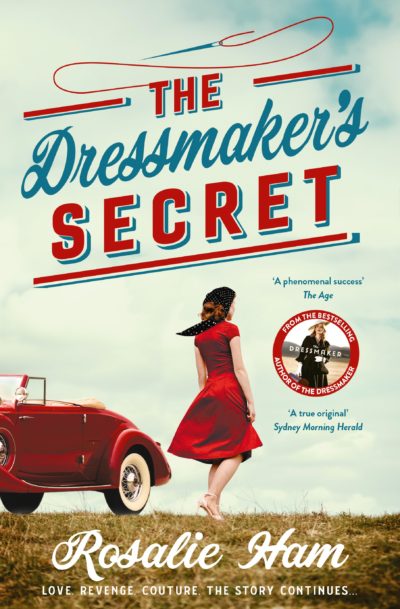 ‘The Dressmaker’ sequel among recent Oz acquisitions – by Think Australian

Australian publishers have been busy acquiring new titles over the past six months, including a kids’ guide to journalism, a ‘vital, groundbreaking book’ about gender transition, and a highly anticipated sequel to Rosalie Ham’s The Dressmaker.

A 2015 film adaptation of Rosalie Ham’s The Dressmaker (Duffy & Snellgrove) sent the novel to the top of the Australian bestseller charts and prompted a flurry of international rights deals. So the news that Pan Macmillan Australia has acquired ANZ rights (via Jenny Darling & Associates) to a sequel was received with great excitement. The Dressmaker’s Secret (November 2020) is set in 1953—the year of the young Queen Elizabeth’s coronation—and moves between the now-ruined Victorian town of Dungatar and fashionable Melbourne.

Allen & Unwin has acquired world rights to author and screenwriter Debra Oswald’s novel The Family Doctor (early 2021) from the Cameron Creswell Agency after a ‘heated’ auction. Pitched as a ‘riveting moral thriller’, The Family Doctor tells the story of a suburban doctor who is devastated by the murder of a friend and her children by the woman’s estranged husband, and is compelled to help patients at risk from their own violent partners.

Several promising debuts have also been picked up by Australian publishers in recent months. Simon & Schuster Australia has acquired ANZ rights (via Catherine Drayton at InkWell Management) to women’s fiction Grace under Pressure by Tori Haschka (early 2021). The novel follows three mothers who move in together after their partners ‘screw up spectacularly’ and create a ‘mummune’—sharing the load of chores, bills and school pick-ups/drop-offs.

Transit Lounge has acquired world English rights to crime fiction The Stoning by Peter Papathanasiou via Martin Shaw from Shaw Literary. Introducing what may be Australian fiction’s first Greek-Australian detective, the novel tells the story of a crime that rocks a small Australian outback town, with suspicions falling on the inmates of a nearby detention centre and the local Aboriginal community.

Other promising early-career fiction acquisitions include Sadvertising, the satirical short story collection from Ennis Cehic, which dissects ‘the world of advertising, consumerism and technology’ (world rights acquired by Penguin Random House Australia); and Jamie Marina Lau’s novel Gunk Baby (early 2021), which is set in a suburban shopping centre and explores ‘the anatomy of a suburban climate and the aesthetic, inner eco-systems we create to distract from the outer’. Gunk Baby was jointly acquired by Hachette Australia and Weidenfeld & Nicolson UK.

After the global success of The Tattooist of Auschwitz, all eyes will be on a new acquisition from Simon & Schuster Australia. The Nazis Knew My Name (late 2021) is Maya Lee’s biography of her mother, Australian–Slovakian Auschwitz survivor Magda Hellinger, who was chosen as one of the Jewish ‘prisoner leaders’ in charge of the accommodation blocks. S&S Australia has acquired world rights.

Allen & Unwin has acquired ANZ rights at auction (via Jacinta di Mase) to a ‘vital, groundbreaking book’ about gender transition. All About Yves: Notes from a Transition by Yves Rees (early 2022) examines the author’s gender transition, with Rees posing the question, ‘Was I always trans, part boy beneath my skin, or was it that I landed in a place where “girl” was a container so small it could break your bones?’

Scribe has acquired world English-language rights at auction (via Martin Shaw at Shaw Literary) to Tom Doig’s narrative nonfiction book We Are All Preppers Now, which examines the practices of survivalism and doomsday prepping in New Zealand and around the world. Scribe will publish in Australia and the UK in late 2021/early 2022.

NewSouth Books has acquired ANZ rights to children’s nonfiction book Kid Reporter: The secret to breaking news (2021) from Benython Oldfield at Zeitgeist Agency. Written by journalists Dhana Quinn and Saffron Howden, Kid Reporter will teach children how to research and interview, write and produce, and start their own school newspaper, news website or podcast. Howden said: ‘A key part of improving news and media literacy among young people is teaching them how to produce media themselves. It’s incredibly exciting to be writing a book that will empower kids to better understand how journalism works.’

Penguin Random House Australia has acquired ANZ rights to the ‘hilarious and heartwarming’ YA novel Anything But Fine by Tobias Madden (2021). The novel follows an unlikely friendship between its teenage protagonist, an aspiring ballet dancer recovering from an injury, and the perfect-in-every-way rowing star of his new school.

Affirm Press has acquired world rights to a four-book middle-grade fantasy series by Samantha-Ellen Bound via Danielle Binks and Jacinta di Mase of Jacinta di Mase Management. The ‘Seven Wherewithal Way’ series is pitched as ‘Nevermoor meets Doctor Who with a dash of Howl’s Moving Castle’. The first book in the series (late 2021) follows two sisters whose summer holidays are uprooted when their cousin sweeps them away to a magical house with a portal to another world.

Affirm Press has also acquired world rights to the picture book Our Family Pledge (2021), based on a poem by Emmaline Carroll Southwell that has accumulated millions of views on video sharing platform TikTok. ‘Emmaline’s video struck a chord the minute we saw it,’ said Affirm Press children’s publisher Tash Besliev. ‘Her family credo speaks to the modern family: a poem that encourages acceptance, love and community, all values which many of us are clinging to even more tightly in 2020.’